The FRIENDSHIP that Roald Dahl wrote about when creating his marvellous characters such as Matilda and Miss Honey or Charlie Bucket and Grandpa Joe. The ASPIRATION that Mo Farah exhibits, in his journey from a non-english speaking refugee to the U.K., to being one of the most successful track athletes of all time. Or that Frida Kahlo demonstrated, continuing to paint despite being in pain. The FORGIVENESS that Malala Yousafzai has shown to people who caused her harm in her quest to provide education for women and children. The JUSTICE that Nelson Mandela fought for in his successful campaign to end apartheid in South Africa. And the HOPE that Alan Turing gave so many people in breaking codes throughout World War 2 at Bletchley Park, motivates both children and staff alike.

In our celebration worship at the end of each term, children who have displayed amazing effort in improving the school community, English, Maths, Sport and The Arts, or displaying our schools Key Values, receive a special award named after one of our ambassadors.

Please meet our ambassadors in a bit more detail below:

Nelson Mandela is our school's ambassador for our Key Values.

Described as South Africa's "Father of the Nation", Nelson Mandela was an anti-apartheid revolutionary and South Africa's first black President. Mandela served 27 years of a life sentence after conspiring to overthrow the government following their racial segregation laws. Released in 1990, Mandela led efforts to end apartheid, which resulted in him being elected President in 1994. Following his election, Mandela gained international acclaim for his activism, receiving over 250 honours, including the Nobel Peace Prize. 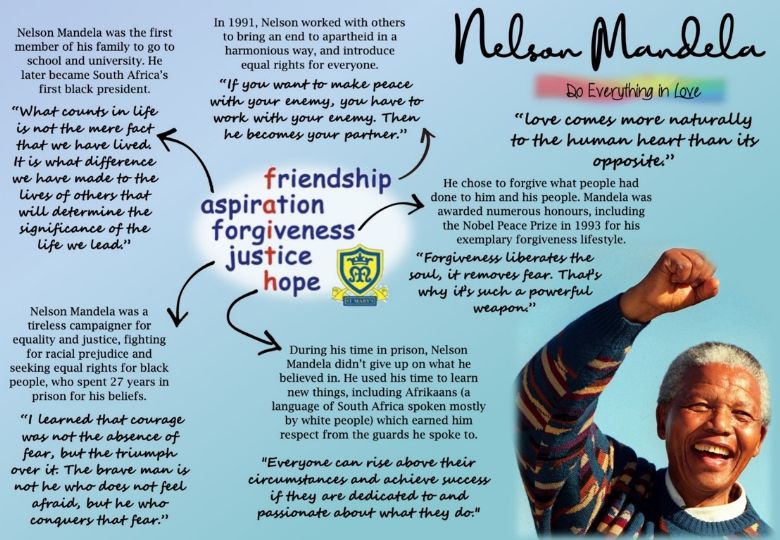 Malala Yousafzai is our school ambassador for community.

Malala is known for her human rights advocacy, especially in the education of women and children following the Taliban banning girls from attending school in her home of Swat, Pakistan. On October 12th 2012, an assassination attempt was made on Malala in retaliation to her activism. Following her recovery, Malala founded the Malala Funf, a non-profit organisation that advocates for the education of women. As well as this, she received the 2014 Nobel Peace Prize, at only 17 years of age. 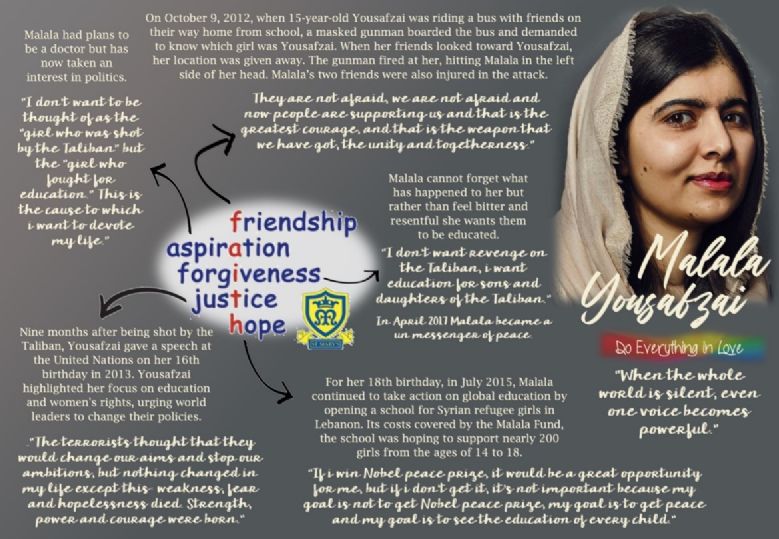 Alan Turing is our school's ambassador for Mathematics.

Alan Turing was an English mathematician and computer scientist, most famous for his work for the Government Code and Cypher School, based in Bletchley Park, throughout World War 2. Turing played a pivotal role in cracking coded messages, allowing the allied forces to defeat the Nazi's in many crucial engagements. After World War 2, Turing designed the Automatic Computing Engine, which is recognised as one of the first examples of modern day computing. Sadly, Turing was imprisoned in 1952, due to being homosexual (which was illegal at the time). 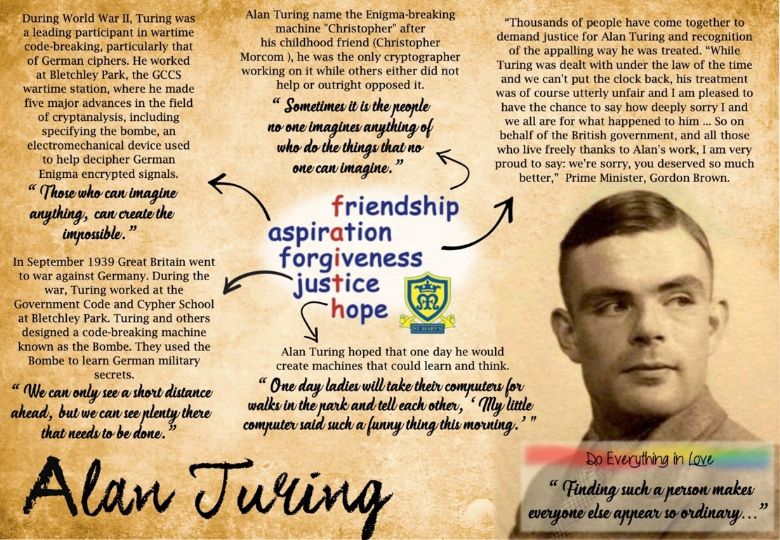 Roald Dahl is our school's ambassador for English.

As well as serving as a fighter pilot in World War 2, Roald Dahl has written over 30 children's books, selling over 250 million copies worldwide. Dubbed as "one of the greatest storytellers of the 20th century", Dahl's stories are known for their unexpected endings, usually featuring villainous adult enemies and championing kind-hearted child heroes. His works include: James and the Giant Peach, Charlie and the Chocolate Factory, Matilda and the BFG. 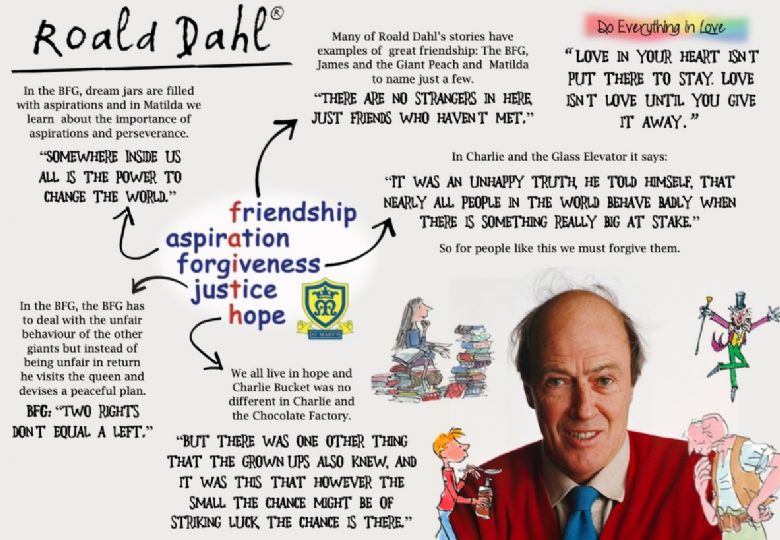 Sir Mo Farah is our school's ambassador for sport.

Born in Mogadishu, Somalia, Farah moved to live in Great Britain at the age of 8 after civil war broke out. At the age of 13 Farah joined the Hounslow Athletics Club, after his athletic talent was spotted by his School P.E. Teacher. Farah won his first major title at the European Junior Championships in 2001 and has gone on to be an Olympic Champion at both the 5000 and 10,000 meter disciplines. Farah is the most successful British Track Athelete of all time. 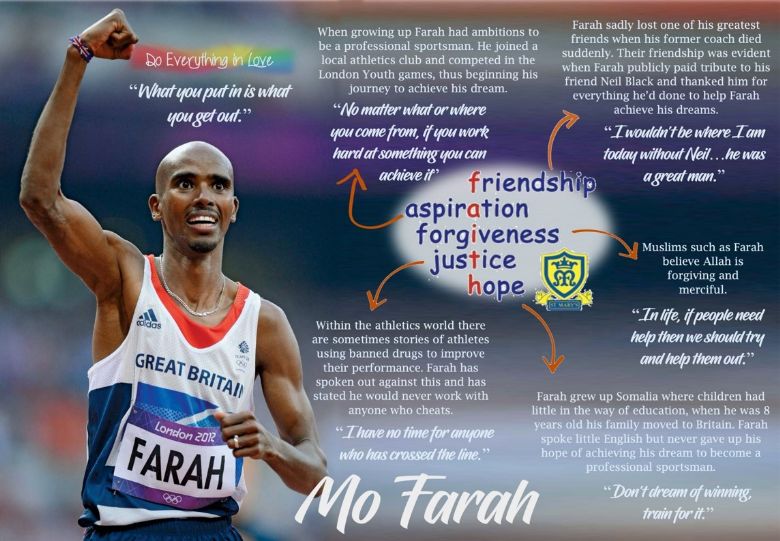 Frida Kahlo is our school's ambassador for the arts.

Kahlo was a Mexican artist known for her self portraits. Her art often had strong autobiographical elements and mixed realism with fantasy. Kahlo suffered with medical illness for the majority of her life due to polio and injuries sustained following a horrific traffic accident, however, she continued to follow her love of art. Kahlo's work remained unnoticed until the late 1970's, and by the 1990's she was not only recognised for her artwork, but also regarded as an icon for civil rights, the feminism movement and the LGBTQ+ community. 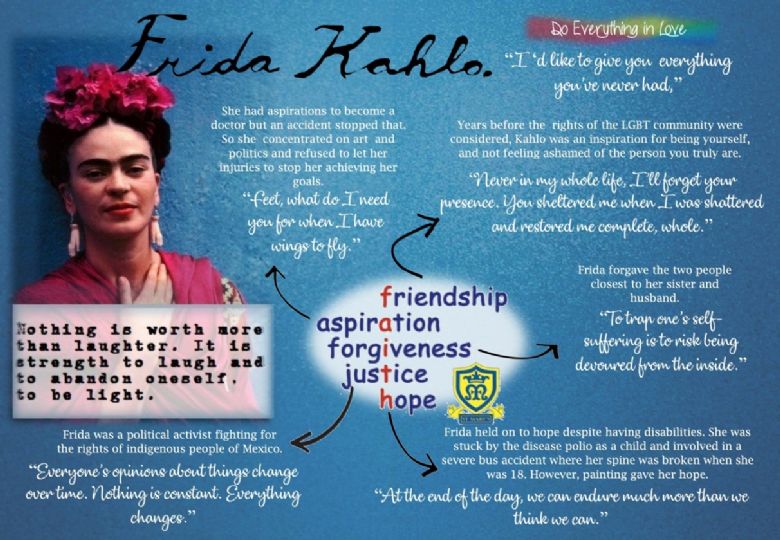